Making slow and steady progress on my finish-knitting-Emma-all-the-animals-by-Christmas plan. As you may recall, a couple of weeks ago I finished making Little Lamb from Spud and Chloe at the Farm. This sweet book has adorable farm creatures that Spud (a sheep) and Chloe (a little girl) meet on the way to Little Lamb's party at a farm. So cute! So to recap, the plan is to make most of the animals and a few barn accessories for my daughter for Christmas. She is obsessed with this book and carries the knitting book around the house daily. She knows all of the characters by sight now. So silly!

So now Little Lamb has some company while the other creatures have yet to be knit. Meet Brown Cow. 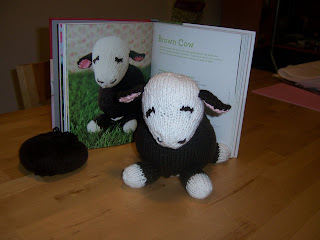 Like Little Lamb, he was knit with stash yarn, Debbie Bliss Pure Cotton. This yarn is soft, but splits and breaks easily, and honestly I cannot tell you how many times I came across knots in each little skein - the arch enemy of knitters everywhere.

So as you can see there are a few parts to sew together. Not so bad, really. I mean, Brown Cow is no 42-part-Patchwork Tortoise (remember that?). 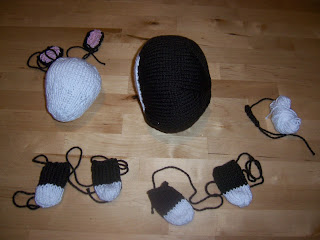 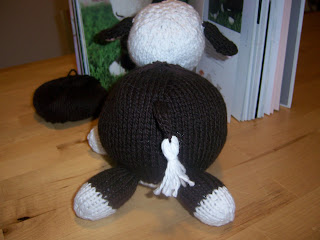 Ah well, now it's time for the fun part- buying the recommended Spud and Chloe Sweater yarn to make the remaining animals. Still to do:

Oh boy, I hope I have time. At least they are fun and quick to knit! 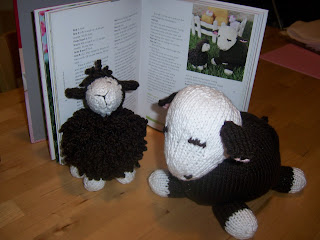 At the beginning of the summer, I sat down and made a list. I love lists. No really! I. LOVE. LISTS. What a better way to start of a season with a lovely little list of things I'd like to accomplish during those few months?  I'm very happy to report that I have already completed more than half of the items on it including making this...

I have had my eye on this pillow pattern, called Popping Pansies, since I first saw it this winter in the Spring 2011 issue of Debbie Bliss Magazine. I knew this pillow was destined to live on my denim couch. And now, many months later, ta da! 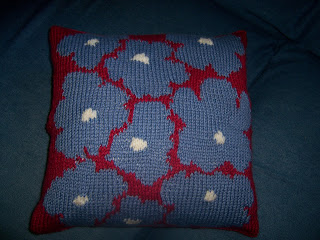 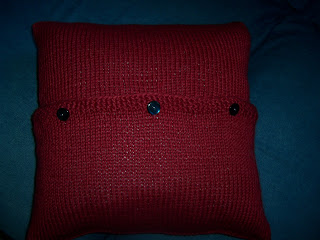 The pattern suggests using Debbie Bliss' Rialto yarn. But the other day I was in my local Joann Fabric's store and noticed that nearly all of Debbie Stoller's Stitch Nation yarn was on sale. When I say "on sale" I mean it was dirt cheap ( a store associate told me that the company was discontinuing certain colors). Knitting with this yarn has been something I'd wanted to try for a while, so it seemed like now was a good time! The Bamboo Ewe yarn was quite nice: soft, smooth and available in so many beautiful colors too. However, I won't deny that even though this yarn is 55% viscose from Bamboo and 45% wool, it had an acrylic-feel to it. Not necessarily a bad thing, just an observation.
FYI: when wet-blocking, the knitted fabric grew a little, so I had to reshape the pillow carefully.

I also used a tiny bit of Mission Falls wool for the white parts of the flowers- a decision I am regretting because those white centers "pop" way too much ( I think the yarn weight- although listed as worsted- was a bit heavier than the Bamboo Ewe). Not to worry, my toddler will flatten that out in now time. Hopefully, she won't also pull off the buttons on the back (which are from my Grandmother's button stash she passed down to me)

Overall, I am happy with the outcome. 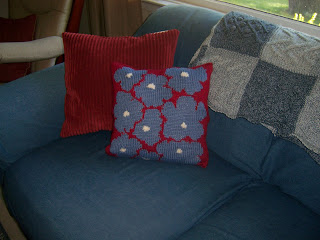 And doesn't it look quite at home on my couch? 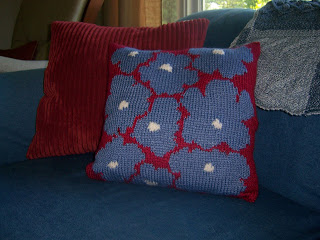 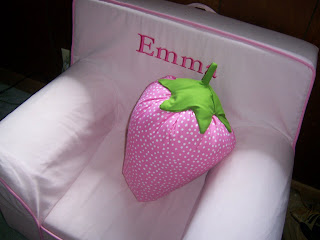 Finished Emma's first Strawberry Pillow this afternoon. I say first because there are definitely more to come! I have enough fabric to make 4. So I'm thinking Emma might not be the only little girl to receive one. 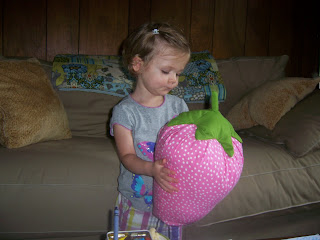 The pattern comes from Purl Soho's blog, the Purl Bee. To make 2 strawberries, you need 1 1/2 yards of print fabric and a 1/2 yard of solid green fabric for the stem/leaves (plus green thread, embroidery floss and lots of fiberfill).

I will admit that I had difficulty sewing the top and bottom parts of the stem together. The templates do not match up neatly, that is because of the ease allowed for slightly stuffing the stem/leaves. However, this does make (in my experience) sewing the parts together somewhat challenging (clearly I need some lessons on hand sewing). So please don't look to closely at my stem... Here is a prettier picture from the Purl Bee of how the stems should look.

Despite my wonky stem sewing, I'm quite pleased with the end result (it is pretty cute, you've gotta admit that).... 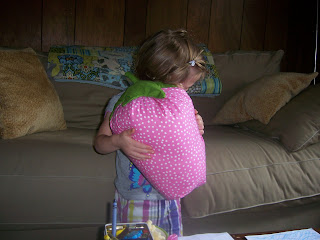 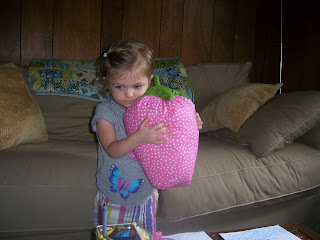 The 4th of July is one of my absolute favorite holidays: family and friends gathering together, grilling out in the sunshine, exploding fireworks, brass bands playing Sousa marches, and eating all-American food. What could be a better way to celebrate this great country's Independence Day?


Oh, I know! How about a little crafting?

Yesterday, we had a few friends over for a small barbecue. I decided to make a few festive crafts to welcome them. And here they are.....

From Purl Soho's blog (the Purl Bee), I used patriotic colors of felt to make the New Year's Garland.

I felt so silly while in the thread isle at my local craft store searching for this invisible thread. It seemed like something from the Harry Potter books, sewing with invisible thread. So after finding it, cutting out the felt circles and winding the bobbin with this mystery thread, I began to sew. It started out smoothly, but after a little while the circles began to bunch up a bit. I'm guessing this is due to my lack-of-outstanding sewing skills. To fix this, I simply ironed out the garland gently, which seemed to do the trick.

The next craft, which I admit I have made before, is from Martha Stewart's craft website. They are called Pretzel Sparklers. Basically, you melt chocolate (I used white chocolate this year) and brush the top third of a pretzel rod with the melted chocolate and then cover that part with sprinkles. They always turn out great and look so festive too!

The last craft, which is also from Martha Stewart's craft website, is called Easy Sand Candles.  My 2 year old daughter helped me with putting these together and boy did she have a swell time. If it was up to her, she would have put sand in and on everything in our kitchen! If you are doing this craft with children, I suggest putting a rimmed cookie sheet under your cups to catch any stray grains of sand that miss the intended target.

And finally, here are a couple pictures of my finished products. I vow to one day own a very pretty camera and develop amazing photography skills, so that my pictures will not continue to look so second-rate and ordinary.... anyway, here they are.... 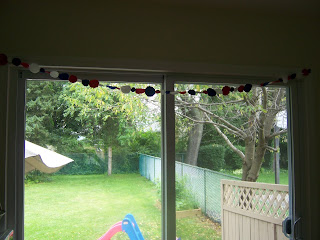 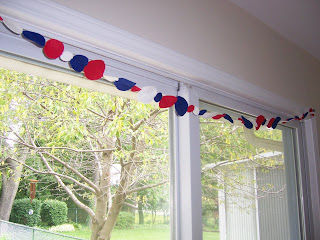 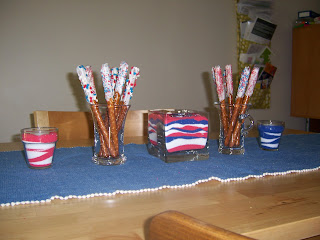 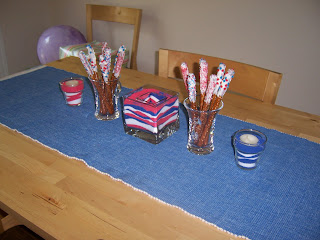 Meg Roke
After working seven years as a special education teacher, I put teaching aside to stay home with my two young children, Emma and Thomas. Over the last three years I have branched into designing knitwear, and have a growing portfolio of online and print published designs. I love spending my days with my husband and kids. In my very rare spare time, I try to squeeze in any quantity of knitting. I also enjoy gardening, baking, reading and sewing in addition to watching way too much Masterpiece Mystery and old movies.